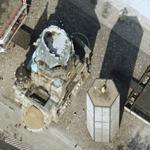 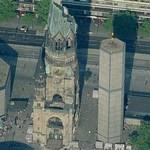 By DonMartini @ 2006-05-27 04:24:58
@ 52.50513231, 13.33496295
Berlin, Germany (DE)
The Kaiser Wilhelm Memorial Church (Kaiser-Wilhelm-Gedächtniskirche) is located at the Kurfürstendamm. It is also commonly known by some locals as the "lipstick and powder puff"!! The old church was built between 1891 and 1895 and destroyed during WW2 bombing in 1943. A new church was built from 1951 to 1961 next to the site of the old one. Apparently the old church was kept as a ruin in memory of the horrors of war. The only remainder of the old building is the ruin of the belfry, which are also referred to as "the Hollow Tooth". An iconic cross of the Russian Orthodox Church and a cross made of nails from Coventry Cathedral (destroyed by Nazi bomb attacks in Britain) can be found here and are signs for reconciliation of the three countries that were once enemies.
Links: en.wikipedia.org
1,025 views