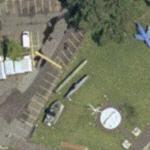 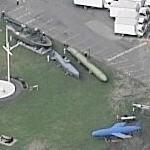 By kjfitz @ 2005-08-25 16:07:49
@ 40.88034769, -74.03980966
Hackensack, New Jersey (NJ), US
The Kaitens were deployed from November 1944, to the end of WW II. They were normally carried piggyback to their target areas aboard mother submarines or cruisers. On a submarine deployment, the crew entered the Kaiten from the lower hatch under its belly. From cruisers, they were lowered over the side.. At approximately 8300 yards, the Kaiten was launched and cruised at periscope depth. At a distance to its target of 550 yards, the pilot would submerge to 13 feet and lock his controls for the final attack run. Three U.S. ships were sunk by Kaitens.

The Seehund (seal) was a successful coastal patrol design submarine. A total of 1,284 were ordered and 67 were built in 1944 and 1945. The Seehund was designed to be used in shallow water close to base, where reloads were available for quick turnaround and return to battle. The two torpedoes were slung externally on rails on each side of the boat. The Seehunds were credited with sinking more than 120,000 tons of Allied shipping in the final months of WW II.

There is also a Riverine Patrol Boat to the south and a blue target drone to the north (though that may be an old anti ship missile.)
Links: ww1.njnm.com
2,788 views