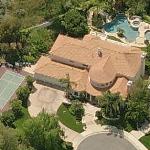 Katie Stern was a contestant during the first season of "America's Next Top Model". She also appeared as a briefcase model for "Deal or No Deal" for more than three years.

Andrew Stern is an internet entrepreneur who co-founded RipLounge.com, a 3D social networking site. He appeared in the second season of "The Millionaire Matchmaker".
Links: www.imdb.com
1,559 views