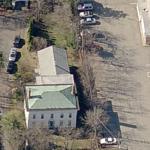 Originally it was in the Greek Revival architectural style, with more elaborate decoration on its main facade. During the late 19th and early 20th centuries, it was home to horticulturist Calvin N. Kenney (1849–1930), breeder of the stringless bean. In 1927, the home was renovated in the Federal Revival style by Bryant Fleming, leaving it with a more restrained main facade. The house and its carriage house were listed on the National Register of Historic Places in 1979.
Links: en.wikipedia.org
795 views