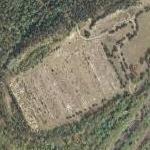 It was named in honor of Charles L. Keerans, Jr. asst. Division Commander of the 82nd Airborne Division. He got killed in action over Sicily island. I'm told it happened accidently by friendly fire while he was on board of an air plane.

The range had two main firing sections including a long distance rifle range which was wide enough for several soldiers to fire side-by-side at maximum distances of 300 yards. Larger weapons required trips to 7th Army ranges such as Wildflecken, Hohenfels, Grafenwoehr, or Hammelburg in West Germany.

In the 1950s Keerans Range was a very simple firing compound with KD (known distance) targets. In the early 1980s it was modernized with automatic eletronic pop-up ("Train Fire") targets. All Berlin Command/Brigade Soldiers made trips to Keerans Range -- especially Infantrymen who will remember the EIB (Expert Infantryman Badge) tests conducted there.
Links: www.berlin-brigade.de
1,095 views