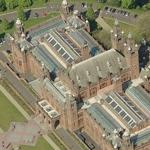 By kkeps @ 2010-09-11 17:44:06
@ 55.86858074, -4.2905042
Glasgow, United Kingdom (GB)
The Kelvingrove Art Gallery and Museum is a museum and art gallery in Glasgow, Scotland. The building houses one of Europe's great civic art collections. Since its 2003-2006 refurbishment, the museum has been the most popular free to enter visitor attraction in Scotland, and the most visited museum in the United Kingdom outside London.

It is located on Argyle Street, in the West End of the city, on the banks of the River Kelvin (opposite the architecturally similar Kelvin Hall, which was built in matching style some years later, after the previous hall had been destroyed by fire). It is adjacent to Kelvingrove Park and is situated immediately beneath the main campus of the University of Glasgow on Gilmorehill.
Links: en.wikipedia.org
812 views