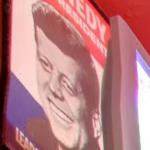 "When I came back to Washington, my job in August 1960 was to organize and put together the whole business of brochures, posters, pamphlets, buttons---all that kind of material on the campaign...I went over to the Democratic National Committee, looked at what had been done four years before and found it was pretty unimaginative. So I went to New York and hooked up with Bernard Quint, who was the art director of Life magazine and we went to work on posters and pamphlets.

President Kennedy was fascinated with pictures of himself and extremely critical of them and so the poster was of great interest to him. The big problem in the summer of 1960 was whether to have a serious, mature poster or a smiling poster. At that particular time one of the major arguments being made by the Republicans was that he was not experienced enough to become president, and therefore, this led a lot of people around him---and himself included--in the beginning to think that he should have a rather serious mature poster. I convinced him that he looked wonderful smiling, but it wasn't easy.....The smiling one was produced in the millions and millions that appeared all over the United States."