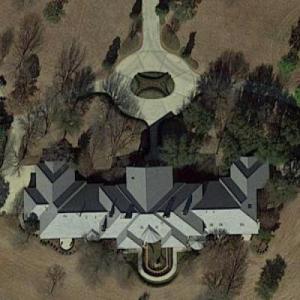 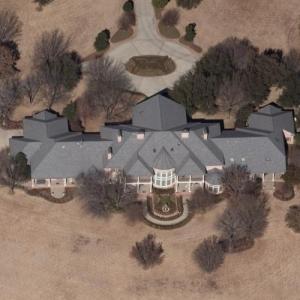 By Champion3 @ 2010-07-24 01:15:57
@ 32.96927573, -97.49955564
Newark, Texas (TX), US
Kenneth Copeland is the founder of the Christian organization Kenneth Copeland Ministries. It promotes the idea that God wants people to be financially successful. He said that when people drive by his house, "they will know there is a God." In the 1960s, he was a pilot and chauffeur for Oral Roberts. Copeland later attended his University. In 2007, the organization was under a Senate investigation for improprieties involving finances.

The Kenneth Copeland Airport, a private airport established by the ministries, is visible to the north east of the home. The organization keeps its $20 million Citation X jet, and another small one there. In 2007, Copeland was accused of using the jet for personal vacations and friends.
Links: www.kcm.org, en.wikipedia.org
63,065 views

Anonymous
@ 2021-12-12 12:29:14
Maybe that's how MOST Prosperity Gospelers are, but Kenneth Copeland is living off a mere 30% of the money that people donate. The rest of it goes DIRECTLY into ministry-expenses & other churches & charities.