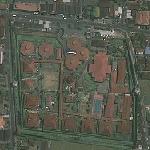 Notable prisoners;
*Schapelle Corby - 20 years; she is currently scheduled for release in 2017 after being granted clemency that took five years off her sentence, but could be released in 2015.