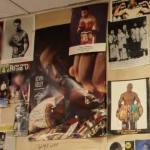 Kelley won two New York Golden Gloves Championships as well as the 1985 119 lb Sub-Novice Championship and the 1986 119 lb Open Championship. In 1988 Kelley advanced to the finals of the 125 lb Open division and was to have met Fred Liberatore in the finals. Kelley was injured and could not fight. Liberatore was declared the Champion by Default-Injury.

In the Olympic box-offs he lost to Carl Daniels. His record was 62-5.
Links: en.wikipedia.org
478 views