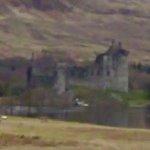 By WacoKidd110 @ 2011-09-01 19:21:35
@ 56.400073, -5.02407
Dalmally, United Kingdom (GB)
It was the ancestral home of the Campbells of Glen Orchy, who later became the Earls of Breadalbane also known as the Breadalbane family branch, of the Clan Campbell. The earliest construction on the castle was the towerhouse and Laich Hall (looks onto Loch Awe). Today, its picturesque setting and romantic state of decay make it one of the most photographed structures in Scotland.
Links: en.wikipedia.org
419 views