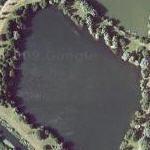 For years, Benson was a catch-and-release attraction in Bluebell Lakes, a private fishing complex. Benson was a normal-size carp when she was placed in Kingfisher Lake 16 years ago. The lakes' owner, Tony Bridgefoot, noticed Benson's propensity to pack on the pounds and groomed her for stardom.
Links: online.wsj.com
527 views