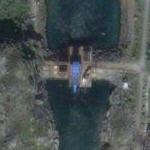 By kjfitz @ 2008-07-24 16:07:26
@ 69.376942, 33.075682
Vidyayevo, Russian Federation (RU)
The Kislaya Guba tidal power station is an experimental project and has a relatively small output capacity of 400 kilowatts. The project began in 1968, but had been suspended for 10 years until December 2004 when funding resumed. The site was originally chosen because the long and deep fjord had a fairly narrow outlet to the sea which could easily be dammed for the project. There are plans for two larger scale projects based on this design near Mezen, on the White Sea and Turgur on the Sea of Okhotsk.
Links: en.wikipedia.org
1,374 views