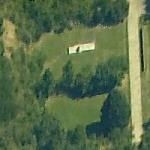 The shooting range was established in 1889-1891, on a site that was at the time far outside the city, as a training facility for the Austro-Hungarian (and, later, Czechoslovak) army. During the Nazi occupation it was used for mass executions as part of retaliatory measures against the Czech people after the assassination of Reinhard Heydrich in 1942. About 550 Czech patriots of every social rank lost their lives here, most of them between May 30 and July 3, 1942, when executions took place almost every day. The bodies of the executed were subsequently incinerated in Strašnice Crematorium.
Links: en.wikipedia.org
567 views