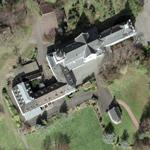 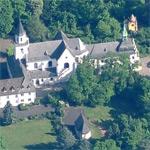 In 1855 the Jesuits took over the church, and in 1889 the Franciscans did so. After it was plundered in 1689, Elector Clemens August had the interior be renovated in the 18th century: with the pulpit and the splendid high altar, both made of gold-plated stucco marble, as well as with bold frescos. In 1746, Clemens August donated the “Holy Staircase”. The famous Balthasar Neumann was involved in its planning. It is located in the magnificent front section, which is supposed to show the house of Pontius Pilatus. The small brass crosses on the second, the eleventh and the last step mark the places, at which particles of the Cross of Christ are said to be set in the staircase. The staircase leads to a chapel, on the altar of which is a crucifixion group, while the paintings in the vault display the triumph of the cross.
649 views