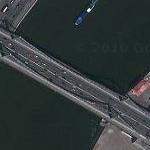 By kkeps @ 2010-06-28 11:58:41
@ 55.73419, 37.599528
Moscow, Russian Federation (RU)
Krymsky Bridge or Crimean Bridge (Russian: Крымский мост) is a steel suspension bridge in Moscow popularly known as a favourite place for suicides. The bridge spans the Moskva River 1,800 meters south-west from the Kremlin and carries the Garden Ring across the river. The bridge links the Crimean Square to the north with Krymsky Val street to the south. The nearby Moscow Metro stations are Park Kultury and Oktyabrskaya.

The existing bridge was completed on May 1, 1938, as part of Stalin's ambitious reconstruction of downtown Moscow. Designed by engineer V. P. Konstantinov and architect A. V. Vlasov, it is the fourth bridge on this site and the only suspension bridge in all of Moscow.
Links: en.wikipedia.org
542 views