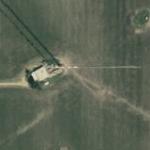 The antenna transmits at 100 kW for CBS affiliate KXJB-TV of Valley City/Fargo; the station and tower are owned by Parker Broadcasting of Fargo.
2,229 views