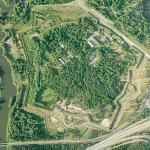 This original fortress was demolished soon and replaced by new almost six times larger fortress in 1803-1808. It was still unfinished when the war between Russia and Sweden started in 1808 and soon lost its strategic importance when Russia conquered whole of the Finland and border moved west to Bay of Bothnia and Tornio River.

During the Finnish Civil War in 1918 Kyminlinna served as a training camp for the red guards and on the 9. April same year was fought the only real battle in the history of the fortress when Germans took it from the red guards.

In the second world war Kyminlinna was used as a refugee camp, prisoner-of-war camp, hospital and small arms shooting range. It was used by Finnish army from 1939 to 2005.
Links: www.muuka.com
905 views