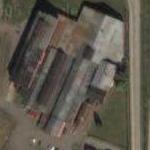 La Belle Iron Works represents a period in history when manufacturers in the Wheeling area dominated the national cut nail industry. La Belle survived the “great nail strike” of 1886, when the wire nail began to overtake the market and manufacture of the cut nail declined. The three original 1852 brick Italianate structures are still an integral part of the plant. The iron truss building, constructed in the mid-1890s, highlights the change in construction techniques that allowed large open expanses for factory floors. Cut nails continue to be made at La Belle Iron Works today in much the same way as when the plant opened in 1852. It is the largest cut nail factory still in operation in the nation.
Links: www.wvculture.org
825 views