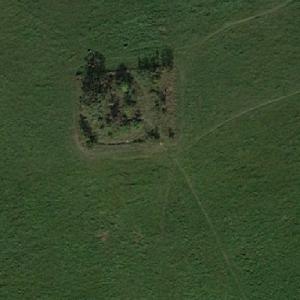 By Drudii @ 2018-09-09 16:44:14
@ 55.6297688, 12.0463243
Roskilde, Denmark (DK)
Låenhøj is a burial mound located in the southern suburbs of the town Roskilde in Denmark. The mound is located in a small fenced-off piece of land within a public forest. Whether the mound dates back to the Neolithic or Bronze Age is unknown. A medium sized depression is seen within the mound which indicates a possible burial chamber would have been buried within the mound. The top of the mound is demolished. Three partially buried large stones can be seen in the depression, one at the eastern end and two in the southern end of the depression, which further indicates a possible stone chamber. The northern part of the mound also has a depression leading into the other depression which indicates a possible passage making the mound the possible remains of a Neolithic passage grave. A large partially buried stone can be seen on the western part of the suspected passage remains.
Links: www.kulturarv.dk
240 views