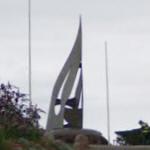 By bubaonline @ 2009-12-13 08:12:05
@ 49.29011, -0.262705
Ouistreham, France (FR)
Constructed on a gun-turret, this symbolic monument of the Liberation is the work of local artist Yvonne Guégan. On the metal of a flame, a wave or a stem, according to one’s vision, the names of 177 French are engraved who took part in the military operations of June 6, 1944. Around, ten small steles carry the names of the commandos who fell between Colleville-Montgomery and Ouistreham, another recalls commander Philippe Kieffer.

The monument was inaugurated on June 6, 1984, by president François Mitterand. Each year, on the anniversary date, French veterans gather here for a moving homage to their comrades who died.
Links: randompottins.blogspot.com
839 views