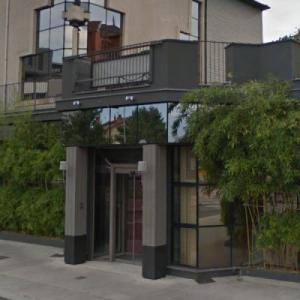 In 1930, Burgundy native Jean-Baptiste Troisgros moved to Roanne with his wife, Marie, and bought a small hotel. She did the cooking, he oversaw the house. This was the beginning of a 3-generation dynasty of gastronomy that has seen La Maison Troisgros celebrate more than 30 consecutive years with three Michelin stars.

Marie and Jean-Baptiste had two famous chef sons, Jean and Pierre among the inventors of nouvelle cuisine. Michel Trosgros is one of two celebrated chef sons (the other is Claude) of Pierre. In this generation Michel is the cook and his wife Marie-Pierre {they met while she was studying hotel management in Grenoble) looks after the house, the decor and the shop.

Michel's cuisine is noted both for its internationalism (there are many Japanese touches) and its use of local ingredients (red currants in summer, for example). He is also known, as is the American chef Mario Batali, for his enthusiastic use of acidic notes in his dishes.