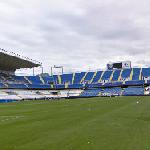 By Mike1989 @ 2013-06-12 09:47:48
@ 36.733722, -4.426249
Málaga, Spain (ES)
Estadio La Rosaleda (Spanish pronunciation: [esˈtaðjo la rosaˈleða]; literally The Rose Garden) is a football stadium in the city of Málaga, in Andalusia, southern Spain. It is the home stadium of Málaga CF in Primera División and was previously the Club Deportivo Málaga, Málaga CF which is heir. The subsidiary Atlético Malagueño also used it as a habitual pitch during his time in the second division. The Costa del Sol Trophy Cup, organized annually by the Málaga Football Club together with the Municipality of Málaga, is held in this stadium. Its capacity is 29,500 spectators, making it the fourth largest stadium in Andalusia.
Links: en.wikipedia.org
435 views