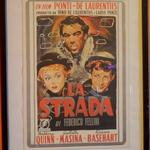 By adrbr @ 2013-08-21 14:03:02
@ 39.470052, -0.372731
Valencia, Spain (ES)
La Strada (The Road) is a 1954 Italian neo-realist drama directed by Federico Fellini from his own screenplay co-written with Tullio Pinelli and Ennio Flaiano. The film portrays the journey of its two main characters: the brutish strongman played by Anthony Quinn and a naïve young woman (Giulietta Masina) whom he buys from her mother and takes with him to see the world; their encounters with his old rival the Fool (Richard Basehart) are their road to destruction. It won the inaugural Academy Award for Best Foreign Language Film in 1956. It was placed fourth in the 1992 British Film Institute directors' list of cinema's top 10 films.
Links: en.wikipedia.org
350 views