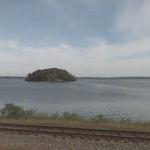 In the 1997 film Titanic, Leonardo DiCaprio's character Jack Dawson mentions that he went ice fishing on the frozen waters of Lake Wissota as a boy. This would have been impossible, as the Titanic sank in 1912, three years before construction on the dam that formed Lake Wissota began.
Links: en.wikipedia.org
1,029 views