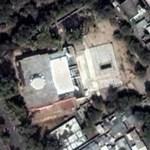 On July 3, 2007, the stand off with the government ended in bloody gun battles in which over twenty people, including students of the mosque, media persons, paramilitary personnel, and a businessman, were reportedly killed and over a hundred others were injured. An FIR was later registered against Ghazi brothers with charges ranging from kidnapping and murder to treason, and terrorism.

To avoid collateral loss, on July 4, 2007, the government offered amnesty to juvenile students if they surrendered. Over 1000 of the radical followers surrendered. Abdel Aaziz Ghazi tried to take advantage of the situation by attempting to slip through a tightening siege while wearing a burqa. His unusually taller physique and a relatively fat belly alarmed a policewoman as she searched fleeing students in central Islamabad. Moreover, he refused to pass through the metal detectors that all surrendering students were supposed to pass through. The group of girls surrounding him claimed that their "aunty" was sick and should not be harrassed by the policewomen. This increased the policewomen's suspicions and they went through his purse, which was stuffed with lipsticks, a woman's ID card, and a pistol. He was, consequently, arrested by law enforcement agencies. A reward was announced for the rangers who captured Abdel Aaziz. Then, on the evening of 5th of July, "Operation Silence" commenced. Gunship helicopters and heavy weapons like mortars and missle launchers were also used in the assault. The gate and walls of Mosque were breached. Operation was affected during the night because of heavy storm and raining. Security officials continously asked Maulana Abdul Rashid Ghazi to surrender. Recently, Abdel Rashid Ghazi has announced that he will not surrender.

At dawn on Tuesday, 10 July, after attempts at negotiation failed, government troops stormed the mosque. An estimated 40 rebels and 3 government troops were killed, the number of civilian casualties is not known. Troops cleared the ground floor of the mosque, but rebels retreated into the basement and the standoff continues.
Links: en.wikipedia.org
1,550 views