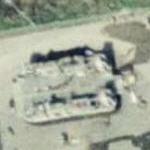 The Landing Craft, Air Cushioned (LCAC) is a class of air-cushion vehicle/hovercraft used as landing craft by the United States Navy, the Japan Maritime Self-Defense Force (JMSDF) and the British Royal Navy. They transport weapons systems, equipment, cargo and personnel of the assault elements of the Marine Air/Ground Task Force both from ship to shore and across the beach.
Links: en.wikipedia.org
919 views