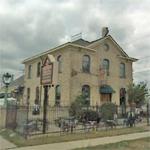 By milwhcky @ 2012-06-17 11:40:09
@ 42.937208, -87.909788
Milwaukee, Wisconsin (WI), US
Most people would assume Milwaukee's oldest tavern would be located somewhere in the city's oldest neighborhoods near the center of the city. They would be wrong. Located on the far south side near Mitchell Airport, The Landmark 1850 Inn is the city's oldest tavern. It was originally known as The New Coeln House when it opened in 1847 as a stagecoach stop between Milwaukee and Racine, Wisconsin. It was added to the National Register of Historic Places on February 11, 1988.

The tavern reopened in 2011 after being closed for renovations that lasted nearly four years.
Links: onmilwaukee.com
988 views