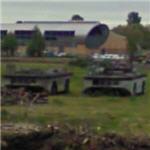 By kjfitz @ 2010-03-11 11:47:23
@ 50.827175, -1.090177
Portsmouth, United Kingdom (GB)
The LARC-60 transports wheeled and tracked vehicles, including beach preparation equipment and general cargo from ship to shore or to inland transfer points. It is the only amphibian in the Army inventory, and the only vessel capable of landing on a beach through a breaking surf. The LARC-60 can be deck-loaded on a commercial vessel or heavy lift ship for transport overseas. It can be transported on a semi-submersible vessel, in the well deck of an LSD, or aboard a SEABEE.

Characteristics and capabilities include the following: