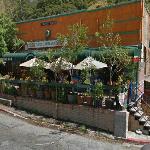 By Gorecki @ 2013-03-01 09:21:20
@ 34.1088, -118.369609
Los Angeles, California (CA), US
The Canyon Country Store has actually been around since the early 1900s. At the time it was known as the Bungalow Inn Lodge and area hunters would congregate there each night to host picnics. The Inn burned down in 1929 and was subsequently rebuilt out of a more substantial brick material. A kitchen was added to the premises a few years later, whereupon food was served to hungry patrons. The property eventually evolved into a grocery store and then finally into the delicatessen/market/fine wine shop/coffee bar that it is today. During the ‘60s, the store became a regular hangout for Jim Morrison and his musician friends, who all lived nearby and would often gather together on the market’s front patio for spontaneous jam sessions. Everyone from Joni Mitchell to Three Dog Night to Frank Zappa has performed live at the market at one time or another. Jennifer Aniston once worked at the store before finding fame in the 1990s. John Carpenter also shot scenes here for his 1980 film The Fog.
Links: en.wikipedia.org
1,371 views