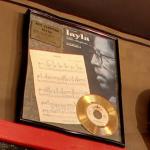 By kjfitz @ 2012-09-25 18:43:25
@ 53.340504, -6.260653
Dublin, Ireland (IE)
Eric Patrick Clapton, CBE (born 30 March 1945) is an English guitarist and singer-songwriter. Clapton is the only three-time inductee to the Rock and Roll Hall of Fame: once as a solo artist, and separately as a member of The Yardbirds and Cream. Clapton has been referred to as one of the most important and influential guitarists of all time. Clapton ranked second in Rolling Stone magazine's list of the "100 Greatest Guitarists of All Time" and fourth in Gibson's Top 50 Guitarists of All Time.

"Layla" is a song written by Eric Clapton and Jim Gordon, originally released by their blues rock band Derek and the Dominos, as the thirteenth track from their album Layla and Other Assorted Love Songs (December 1970). It is considered one of rock music's definitive love songs, featuring an unmistakable guitar figure played by Eric Clapton and Duane Allman, and a piano coda that comprises the second half of the song. Its famously contrasting movements were composed separately by Clapton and Gordon.
Links: en.wikipedia.org
501 views