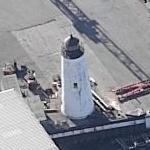 The original tower on this point was built in 1831 by John Donahoo, the builder of 12 Chesapeake Bay lights. This was the tenth light that he was to build. It was 31 feet tall and was built of brick. The decision to build here was made because the government already owned five acres of land that they had used for a smallpox hospital which had been closed. In the late 1850's the original eleven lamps and reflectors were replaced with a fourth- order Fresnel lens with a fixed white light. In 1836 a fire destroyed the old hospital and damaged the keepers house. A new keepers house was built that year using salvaged bricks from the old keepers quarter's and the hospital. This new house was 20 by 35 feet and two stories tall.

In 1863 the Lighthouse Board took over the entire site of the old hospital to use for a storage depot for buoys but, because of the war, the area was used a ordinance depot for the next three years. In 1870 a fog bell went into service and the white light was changed to red. It was not until 1871 that the depot was repaired and workshop, wharf and seawall installed. In 1872 it began producing the framework for screwpile lighthouses and did some assembly of caisson type lights prior to floating them to their sites.

By 1883 the area around the depot had been extensively developed with many large buildings. There were many complaints that the light was too short to be seen coming up the river to the harbor. A tall mast was erected behind the lighthouse and displayed a red light. In 1884 this mast was moved nearer to the river to help the visibility problem. And then in December of 1888, they took down the mast and moved the light back to the tower and made it a flashing light.

In 1914 the depot and the lighthouse finally was electrified. The lens at this time was changed from a fourth-order to a three-and-a-half order lens. By 1920 the light was considered almost useless because it could not be seen due to all the buildings. In 1926 the Lighthouse Board gave up and erected a taller steel skeleton tower to replace the old lighthouse. This light went into service on September 27, 1926 and the next day work began on demolishing the old tower.

In 1985, the new owners of the Rukert Terminals Corporation, (the son and nephew of late Norman G. Rukert Sr.) decided to erect a replica of the Lazaretto Point light to honor Rukerts, Sr.'s memory. He had been a historian and a person who had loved the Baltimore waterfront. The replica was built from the original plans that were found at the National Archives.

The light is now on the end of the pier of the Lehigh Cement Corporation. The light is located on private property but if you are lucky, you can drive to the light.
Links: www.cheslights.org
714 views