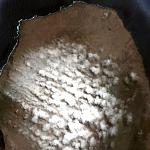 The Isle of Amsterdam, which is wholly of volcanic origin, rises 50 km south-westernly from the East Indian mid-oceanical ridge. It used to be a rather ordinary volcano made up with lava-overflows and projected basaltic scoria. The isle erected itself in two stages during the last 690,000 years and probably most extensively within the years 400,000 to 200,000.

The second stage produced the neovolcano "La Dives" and some lava- flows out of the caldeira. Some of them may be several kilometres long, the largest of all being the 600 m wide "Plateau des Tourbieres" (peat-bog plateau); some others created lava-tunnels too. Scoria-cones appeared at the end of the volcanic activity; the recentest of them dates back to the previous century.
Links: jygeorges.free.fr
1,066 views