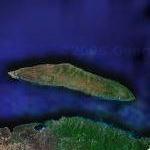 Its name in both Spanish and French means "Turtle Island" or "Tortoise Island", and it is sometimes called that in English. In the 17th century, it was a major center of piracy.
Links: en.wikipedia.org
2,085 views