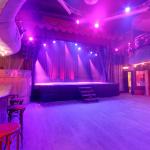 At the beginning of the 19th century, there was a ballroom called the Saint-Flour Musette. In 1861 it was turned into the Brasserie des Martyrs, which was patronized by Charles Baudelaire and Jules Vallès. This was replaced in 1873 by a café-concert christened the "Divan Japonais" ('Japanese Divan') by its owner Théophile Lefort, who decorated it in Japanese-style. His successor, Jules Sarrazin, had a second room built in the basement called "Temple de la Bonne Humeur" ('Temple of Good Humour').

In 1994, it was reopened as Le Divan du Monde, featuring world music concerts. In November 2009, it was completely redecorated, and now hosts events from concerts to club nights.
Links: en.wikipedia.org, madamearthur.fr
663 views