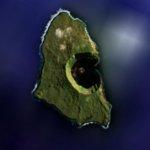 A scientific research cabin on the island is used for scientific or ecological short campaigns, but there is no permanent population.

Île Saint-Paul is one of three islands which is an antipode of the United States. It correspondes to Firstview, Colorado. The other two antipodes are île Amsterdam and Kerguelen Island.