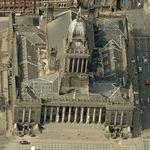 By adrbr @ 2008-03-10 10:57:33
@ 53.800265, -1.549801
Leeds, United Kingdom (GB)
Leeds Town Hall was built in 1858 in Park Lane, Leeds, West Yorkshire to a design by architect Cuthbert Brodrick. It represents Leeds' emergence as an important industrial centre during the Industrial Revolution and a symbol of civic pride and confidence. It is one of the largest city halls in the United Kingdom and the seventh tallest building in Leeds. The town hall was opened by Queen Victoria, highlighting its status as an important Victorian civic structure. It is a Grade I listed building.

With a height of 226 ft (69 m) it was the tallest building in Leeds from its construction in 1858 until 1966, it lost the title to the Park Plaza Hotel, which stood 8 m taller at 77 m. It has held the title longer than any other building, a record 108 years. The distinctive clock tower, which serves for many as a symbol of Leeds, was not part of the initial design but was added by Brodrick as the civic leaders sought to make an even grander statement.

It was built to serve many functions including -

To house various council offices.
To act as the new courtroom facility for the city.
To serve as a police station or 'Central Charge Office'.
To provide a hall for concerts and civic events.
Links: www.leeds.gov.uk, en.wikipedia.org
736 views