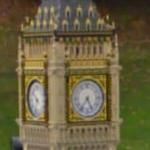 By GlobalPlayer @ 2010-04-20 04:59:25
@ 51.464164, -0.651865
Windsor, United Kingdom (GB)
Miniland is an example of a Miniature park in Lego form; it consists of a number of large Lego models and landscapes depicting towns and cities from around the world. Nearly 40 million Lego bricks were used to construct the models, which tend to be on a 1 to 20 scale. The models change frequently from year to year, and contain many animated and moving pieces.

A London section includes buildings such as the Gherkin, the Millennium Bridge, a rotating London Eye and Canary Wharf. Other famous London landmarks modelled in Lego include St Paul's Cathedral, Horseguards Parade (with the Queen) and Tower Bridge. A train system operated, modelled on the Docklands Light Railway.
Links: en.wikipedia.org
4,267 views