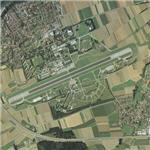 After the end of World War II in 1945, a displaced persons camp for Jewish survivors was established on the premises of the former air base. This camp, which sheltered up to 3,150 people, was disbanded in June 1950. After 1957 the area was used for military air traffic again until 1993.
Links: en.wikipedia.org
1,023 views