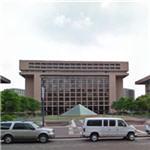 By kjfitz @ 2010-01-07 14:00:34
@ 38.883939, -77.025916
Washington, Washington, DC (DC), US
The L'Enfant Plaza Hotel is a boutique hotel located in downtown Washington, DC, USA. Managed by Crestline Hotels & Resorts Inc., the hotel is located in L'Enfant Plaza. The hotel is named after Pierre (Peter) Charles L'Enfant who was the designer and architect of the street layout of Washington DC. President George Washington appointed L’Enfant in 1791 to design the new capital city under the supervision of three Commissioners, whom Washington had appointed to oversee the planning and development of the ten-mile square of federal territory that would later become the District of Columbia. The hotel features 370 guest rooms on 4 floors of a 15-story building, and has two restaurants: The American Grill, and the Lobby Lounge.
Links: en.wikipedia.org
787 views