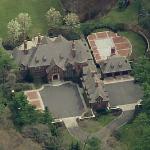 This home was used as the filming location for the home of DiCaprio and Margot Robbie's characters.
Links: en.wikipedia.org
5,132 views