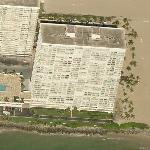 By jdubble07 @ 2010-04-27 17:33:41
@ 26.09624089, -80.1061031
Fort Lauderdale, Florida (FL), US
Leslie Nielsen was a Canadian actor and comedian. Although Nielsen's acting career crosses a variety of genres in both television and films, he has achieved his greatest film success as Commander John J. Adams in the film Forbidden Planet, and also in comic movies, including Airplane! and The Naked Gun series. His portrayal of serious characters seemingly oblivious of (and complicit in) their absurd surroundings gives Nielsen a reputation as a comedian.
Links: en.wikipedia.org, www.aol.com
1,438 views