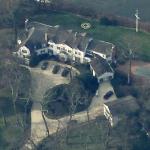 By jdubble07 @ 2013-09-19 11:57:42
@ 40.3742997, -74.02327401
Rumson, New Jersey (NJ), US
Lewis Eisenberg is an American business financier and investor, with entrepreneurial roots known for co-founding and heading a private equity firm, Granite Capital International Group L.P. Lewis Eisenberg has a multi-decade history in American political fundraising circles and is most notable for the various national, state, and bi-state appointments he held throughout his career, specifically as the Chairman of the Port Authority of New York and New Jersey at the time of the September 11, 2001 attack of the World Trade Center.
Links: en.wikipedia.org
3,103 views