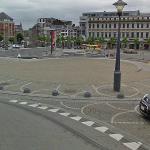 At least two of the assailants are thought to be on the run after the attack in Liege and police are telling residents to remain in their homes or seek shelter in shops or public buildings.

Interior Ministry official Peter Mertens confirmed the attack in the city and said emergency medical teams were called in from as far away as the Netherlands.

The broadcaster Radio Television Belge Francophone said that all buses had been asked to leave the city centre and all shops in the area were closed, some with many customers stranded inside.
Links: www.dailymail.co.uk
439 views