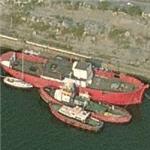 Decommissioned in 1970 and sold to the Scout Association of Ireland. Moored in Dun Laoghaire Harbour and used as a sea cadet training ship.

Today the Albatross is still in Dublin. She has been moved from the entrance of the Grand Canal to the Pigeon House Harbour, near the power station. It is said that it is the intention to eventually convert Albatross into a houseboat or yacht.
Links: www.feuerschiffseite.de
852 views