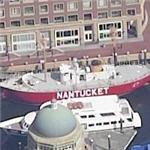 Finally, after being decommissioned on March 29, 1985 Lightship 612 was sold to the Boston Educational Marine Exchange and has since passed through a number of owners. As of 2006, she is privately owned and has been converted to a luxury yacht which is berthed in Boston and is for sale.
Links: en.wikipedia.org
1,162 views