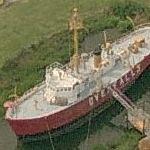 Overfalls had a distinguished career before arriving in Lewes, DE. Between 1938 and 1972 it was stationed at three different lightship stations: first, at Cornfield Point off the coast of Connecticut, then at the Cross Rip Station off the coast of Massachusetts, and finally the Boston Station just off Cape Cod. After suffering major structural damage in a December, 1970 storm, the Overfalls was taken out of service in 1971, and decommissioned in 1972.

Overfalls is one of only 17 remaining lightships out of a total of 179 built from 1820 to 1952. It was placed on the National Register of Historic Places in 1988.
Links: www.hnsa.org, en.wikipedia.org
991 views