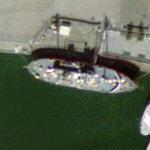 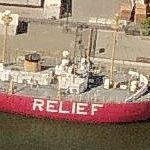 By kjfitz @ 2005-08-13 23:17:47
@ 37.795695, -122.280568
Oakland, California (CA), US
Lightship 605 - now called Relief - is one of six all-welded lightships constructed for the U.S. Coast Guard. She served for 25 years as a floating lighthouse, landfall and communications platform. Her first duty station was as Overfalls lightship station off Delaware. In 1959, she was transferred to the Blunts (reef) station off Cape Mendocino, California. In 1969, she became Relief, relieving all West Coast lightships when they left station for overhaul. She was decommissioned by the Coast Guard in 1975, and given to the City of Olympia, Washington.

Relief was purchased from the City of Olympia by Mr. Alan Hosking of Woodside, California in 1979. He donated her to the U.S. Lighthouse Society in December 1986. For 17 years, volunteers of the Society worked to restore the vessel. She was opened to the public as a floating museum in October 2002.
Links: www.hnsa.org
913 views