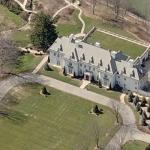 By forthefallendrms @ 2011-10-18 06:12:53
@ 39.82848099, -86.18530272
Indianapolis, Indiana (IN), US
Lilly House and Gardens, is a 26 acre historic estate and house museum on the grounds of the Indianapolis Museum of Art in Indianapolis. It was built between 1909 and 1913 by architect Lewis Ketcham Davis for the family of Hugh McKennan Landon, who occupied the home from 1913 until 1932 when it was sold to J.K. Lilly, Jr. Lilly, the late Indianapolis businessman, collector, and philanthropist, renovated and expanded the estate throughout the 1930s and 1940s, updating interiors as well as adding a number of new buildings to the grounds. The historic house is currently interpreted to reflect the 1930s era when the Lilly family occupied the residence. The rest of the estate, which was given to the Art Association of Indianapolis by Lilly's children in 1967, now makes up a major portion of the Indianapolis Museum of Art campus.
Links: en.wikipedia.org
1,303 views