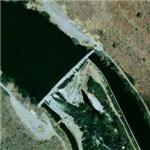 By kjfitz @ 2010-04-28 16:53:27
@ 42.233919, -121.801901
Klamath Falls, Oregon (OR), US
The Link River Dam is a concrete dam on the Link River in the city of Klamath Falls, Oregon. It was built in 1921 by the California Oregon Power Co. The dam was built to control the water level of Klamath Lake in order to maximize power production. Water stored behind the dam also supplies most of the water used for irrigation in the Klamath Reclamation Project.

The Link River Dam diverts water to two hydroelectric power plants located downstream. The two turbines are part of a group of seven projects, supplying 151 MW for PacifiCorp. PacifiCorp recently announced the Link River power projects will be abandoned as the cost to repair the canal and pipeline supplying the power turbines is too high to be economically viable.